Dan Dustin, a forty-five year veteran of the League of NH Craftsmen, has exhibited at the Cooper-Hewitt Museum and Elements Gallery in New York City. He has been featured in Fine Woodworking Magazine, as well as numerous other publications. His spoons have been purchased by the Currier Museum in Manchester, NH and are in the permanent collection of the Hopkinton (NH) Historical Society and the Peabody Essex Museum.. After graduating from Bates College, Dan studied art with George Osborne and folk craft with Norris Patch. His roots in the New Hampshire family farm are reflected in both his work and his teaching style. 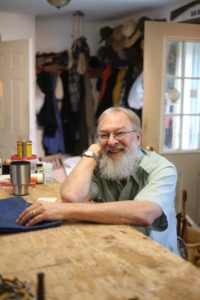 A third generation schoolteacher, Dan began practice teaching early as he followed his mother’s advice: “when the lessons get hard, just pretend that you’re teaching someone else.” Dan taught ninth grade Earth Science, and English and General Science in middle school. Private teaching of the flute has been a part of his daily schedule since 1965. He has taught Hand Spoonmaking since 1972 at all levels, including two residencies at New England College, three residencies at the Holderness School, eight years at NHTI, and numerous workshops at NH elementary schools. In early 2009, he was voted the Best Arts Teacher in Concord, NH, in an online Hippo poll.

It seems incredible that another year is coming to a close. As you approach this holiday season, we hope that you will consider the gift of a beautiful, unique, hand-made spoon, bowl, fork or letter opener.

If you don’t find what you need here on the website, please feel free to drop us an email using the handy Contact form. Stay well and best wishes!